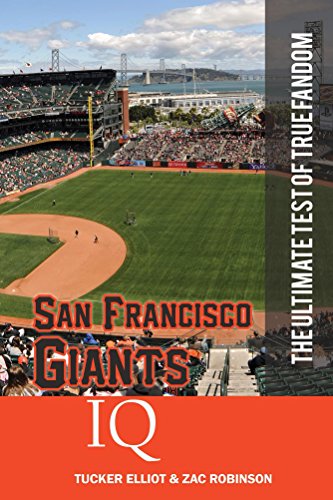 Ask any fan to name “great” baseball franchises and you will surely hear the Chicago Cubs, Los Angeles Dodgers, Boston Red Sox, and New York Yankees … but here is a fun fact: none of those teams have won as many regular season games as the Giants. In fact, the Giants have the most regular season wins of any team in the history of organized sports—period.

The Giants can “drop” names with the best of them. Giants MLB.com beat writer Chris Haft perfectly illustrated this very point in February 2009 with a blog titled, “Now we know it's baseball season: Mays is here.” He went on to write: “The Giants were graced Monday by the arrival of Willie Howard Mays, who needs no introduction.”

This is a book of history and trivia.

Its purpose is to celebrate this historic franchise and its iconic players. In these pages you will find Hall of Fame legends, award-winners, postseason triumphs, fan-favorite players, awe-inspiring performances … the glory, passion, and emotion that the greatest moments in franchise history evoke.

Sit back and reminisce.